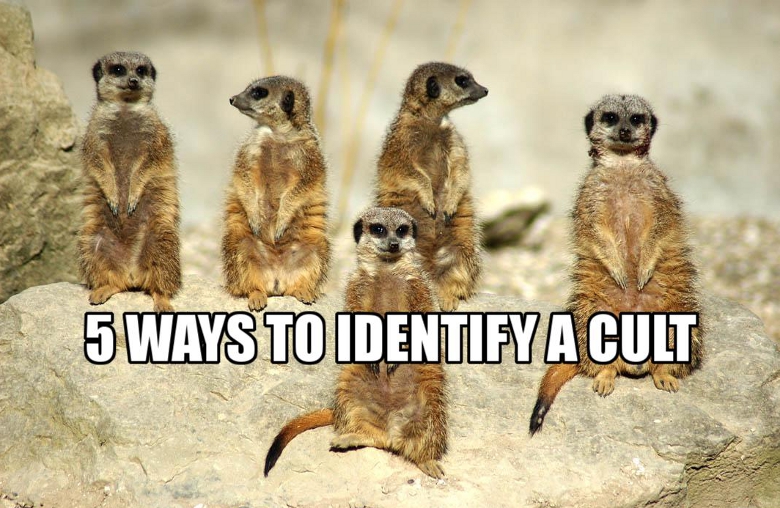 How do you recognize a cult?  By “cult”, I mean a group which claims to represent genuine, apostolic Christianity but in reality does not.  Based on our study of 1 John, here are 5 questions which separate “the sheep” from “the wolves” (Matthew 7:15).

Cults almost always deny the deity of Christ in some way.  They may claim he was an angel or a mere man, a guru or  great teacher or a “god like us.”

2. How is salvation attained and is anyone outside their group saved?

If we say that we have no sin, we are deceiving ourselves and the truth is not in us. If we confess our sins, He is faithful and righteous to forgive us our sins and to cleanse us from all unrighteousness. If we say that we have not sinned, we make Him a liar and His word is not in us. My little children, I am writing these things to you so that you may not sin. And if anyone sins, we have an Advocate with the Father, Jesus Christ the righteous — 1 John 1:8-2:1

Cults almost always add some kind of works in addition to belief : keeping a particular set of ethical commands, a way witnessing, a method of using your money, a certain lifestyle, etc.  Scripture says that all true believers are part of the body of Christ regardless of what denominational affiliation they may have (John 10:16; Ephesians 1:13-14,22-23); cults almost always only those inside their own group are saved.

3. Is the Bible alone authoritative?

Jesus says that the Old Testament, His own words and the writings of the apostles alone were divinely inspired.  Cults almost always deny biblical authority, either by directly saying that the Bible has errors or is not to be believed, or by elevating another book or teacher above the Bible in authority.

4. How does the group treat its members and other people?

By this we know that we have come to know Him, if we keep His commandments. – 1 John 2:3

The Bible says that leaders should be servants (John 10) of high moral character (I Timothy 3) and prohibits leading for personal gain  (1 Peter 5).  Cult leaders tend to “fleece the flock” and are often guilty of financial and/or sexual exploitation of their followers.

Additionally, cults usually practice excessive use of authority.  While the Bible teaches that Christians can be disciplined by other believers, that discipline should be only over scriptural issues; the person is free to leave at any time and all leaders are subject to same discipline (1 Timothy 5:17-22).

By contrast, cult leaders frequently impose non-scriptural proscriptions on their members (where to live, who to marry, what job to take, etc); the follower is frequently coerced into staying in the group and there is no accountability for the leader.

5. Does the group have secret or private teaching only the privileged can learn?

As for you, let that abide in you which you heard from the beginning. If what you heard from the beginning abides in you, you also will abide in the Son and in the Father. This is the promise which He Himself made to us: eternal life. These things I have written to you concerning those who are trying to deceive you. As for you, the anointing which you received from Him abides in you, and you have no need for anyone to teach you; but as His anointing teaches you about all things, and is true and is not a lie, and just as it has taught you, you abide in Him. – 1 John 2:24-27

The Bible says that the message of the gospel should be spoken openly (Acts 20:20-21), but cult members often refuse to answer  pointed doctrinal questions.  Only after a follower joins an instructional class or attends a retreat, are they given the “true understanding”.  Sometimes this deceit is justified by claiming it takes time for people to understand spiritual things.

Learn More
(This article has been read 522 times plus 4 today.)