High Five for Friday!  Here’s a look back at some of my favorite things from this week for which I am grateful. 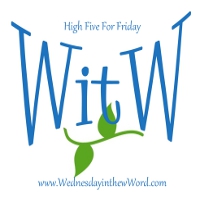