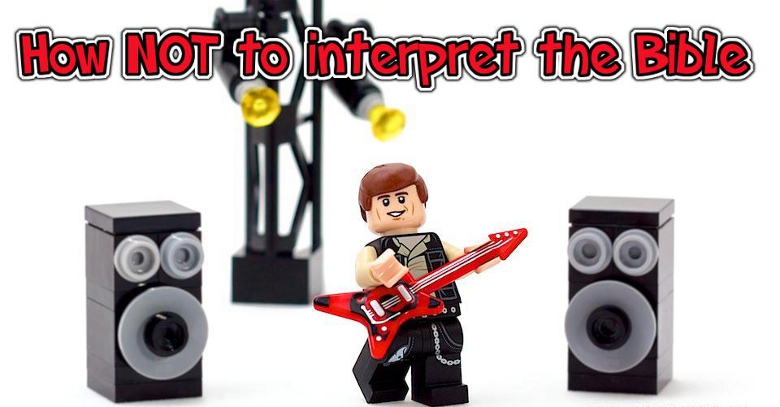 One of the most common mistakes in interpreting the Bible is riffing on a particular word or phrase at the expense of context.  No one thinks they fall into this trap and yet, if you listen for it,  you’ll hear it everywhere.

One of my bible teachers taught me how to spot this method through this analogy:

Imagine that 100s of years after your death your writings are discovered on this archaic device called a “blog.”

Future folks are amazed at your wisdom and common sense insights — now missing from their post-post-post-modern culture.   They begin reading your blog as a companion to scripture, using your explanations to help them understand ancient culture, and holding you up as their exemplar.  In effect, you become the posthumous founder of a new religion.

In one of your writings, you addressed a friend on the brink of disaster.  Fearing she was making a serious mistake with disastrous consequences, you wrote to her,  “I urge you to think twice before you take any action.”

Upon reading that “verse” (“I urge you to think twice”),  your followers in the distant future recognize it as the key to peace, fulfillment and happiness.

“Our founder has urged us to think twice,” they say.  Thus, they develop a daily discipline where no decision is ever made without thinking twice. They write books about various techniques for achieving success at thinking twice. They create mnemonics that all begin with the letter T to help them put “think twice” into action. And, they develop a 12-step plan to help failed “twicers” get back on the wagon.

Then some innovative group realizes if thinking twice is good, then three times must be even better. And the “thricers” are born!

If you were transported to the future, and the “twicers” and “thricers” flocked to your feet to hear your wisdom, what would you tell them?  Is that what you meant? Did you mean to inspire a set of religious disciplines when you wrote:  “I urge you to think twice”?

No, of course not.

You wrote those words in a particular context. You were speaking to a particular friend at a particular point in her life, a friend who had decision to make and was making it badly.  You meant, “I want you to reconsider the foolish way you have been thinking and come to a different conclusion.” You used a common expression of our day (though it may no longer be in use 100s of years from now) in a specific context to a specific person warning of a specific course of action.

Riffing off a phrase is bad methodology. And I’ve tried to exaggerate the methodology to make the point. Yet, examples of this methodology are legion.

When Paul says in Colossians 3:2 “set your minds on the things that are above”  or in Ephesians 4 “put off your old self” — we treat that like “think twice” and we build a religious discipline around it.

Context matters. Application and exhortation sections of the Bible have a context just as much as didactic sections.  We have to be willing to let the biblical authors set their own agenda.

It’s tempting to lift exhortation sections out of context because they appear to stand alone.   They tend to be shorter and move quickly from one idea to the next,  so we tend to treat them like isolated musical notes, missing the beautiful melody they play when connected by context and a line of thought.

Part of the Series: Bible Study 101