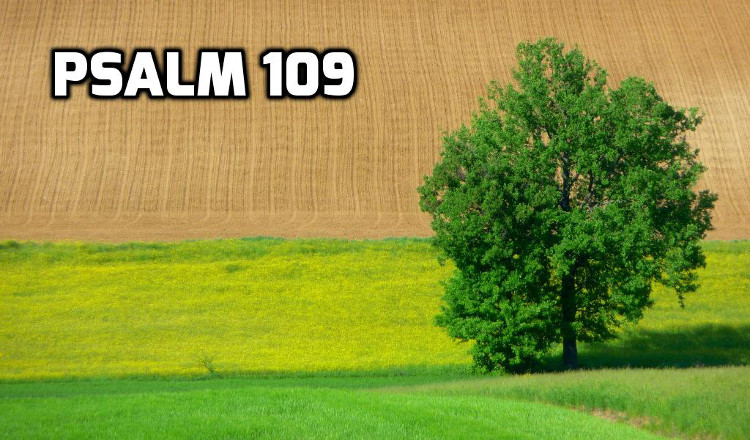 David railed upon by Nabal, the husband of Abigail (1 Sam 25)

Problems and Issues in this Psalm

1 For the choir director. A Psalm of David. O God of my praise, Do not be silent!
2 For they have opened the wicked and deceitful mouth against me; They have spoken against me with a lying tongue.
3 They have also surrounded me with words of hatred, And fought against me without cause.
4 In return for my love they act as my accusers; But I am in prayer.
5 Thus they have repaid me evil for good And hatred for my love.

Thus they have repaid me evil for good And hatred for my love. Is the primary compliant of David.

In return for my love they accuse me, even as I make prayer for them. So they reward me evil for my good, and hatred for my love. (Psalms 109:4-5 RSV)

This man understands that “a soft answer turns away wrath,” and he has tried that with them. He has followed the New Testament standard of praying for those who hate him and despitefully use him. It is remarkable, is it not, that here in the
Old Testament you find such a clear demonstration of the fulfillment of the New Testament requirement to pray for our enemies. We are to love those who persecute us and try to do good toward them. This man has done that yet it has not altered the situation. His enemies have not ceased their attack; they are just as vicious, just as malicious, just as fiercely hostile as they were before, and now he does not know what to do next. This is the problem that faces him at this
point.

v. 2 against me lit. with me enemies pretending to be on friendly terms.

v. 6-20 Quotation of the curses uttered by the psalmist’s enemies

Evidence:
1. Beginning and End of the Psalm the enemies are spoken of in the plural, but in 6-20 they are singular.
2. v. 28 explicitly states the psalmist’s foes resorted to curses
3. v. 21 But Thou, O God suggests what was said previously was adversaries
4. The Psalmist’s own ”curses” are in v. 29

Problems:
1. v. 16b refers to the Psalmist (?) cf. v. 22
2. Chief enemy or collective could explain the singular or the singular could be the Hebrew way of saying each one of them.
3. The cultural belief in the power of the spoken work would probably prevent the Psalmist from repeating this type of curse.
4. This makes Peter’s reference to Judas very forced (This objection can perhaps be answered by pointing out that in verse 20 David returns the curse to those who deserve it. But this is somewhat circuitous.)

This is confirmed by the fact that in the Jewish version of the Old Testament, Verse 20, which is the conclusion of this quoted portion, instead of reading “May this be the reward of my accusers from the Lord,” says instead, “This is the
reward which my accusers seek from the Lord, those who speak evil against my life!”

6 Appoint a wicked man over him,
And let an accuser stand at his right hand.
7 When he is judged, let him come forth guilty,
And let his prayer become sin.
8 Let his days be few; Let another take his office.
9 Let his children be fatherless And his wife a widow.
10 Let his children wander about and beg;
And let them seek sustenance far from their ruined homes.
11 Let the creditor seize all that he has,
And let strangers plunder the product of his labor.
12 Let there be none to extend lovingkindness to him,
Nor any to be gracious to his fatherless children.
13 Let his posterity be cut off;
In a following generation let their name be blotted out.
14 Let the iniquity of his fathers be remembered before the LORD,
And do not let the sin of his mother be blotted out.
15 Let them be before the LORD continually,
That He may cut off their memory from the earth;

Brethren, the Scripture had to be fulfilled, which the Holy Spirit foretold by the mouth of David concerning Judas … For it is written in the book of Psalms, Let his homestead be made desolate, and let no man dwell in it; and His office let
another man take.

v. 16 For introduces reasons for imprecation. NO! Because of … (v.20) Therefore let this be their reward…

16 Because he did not remember to show lovingkindness, But persecuted the afflicted and needy man, And the despondent in heart, to put them to death.
17 He also loved cursing, so it came to him; And he did not delight in blessing, so it was far from him.
18 But he clothed himself with cursing as with his garment, And it entered into his body like water And like oil into his bones.
19 Let it be to him as a garment with which he covers himself, And for a belt with which he constantly girds himself.
20 Let this be the reward of my accusers from the LORD, And of those who speak evil against my soul.

Should v.16-19 continue the accuser’s quotation or be a commentary on the accuser?

God’s Dealing with Me (David)

21 But You, O GOD, the Lord, deal kindly with me for Your name’s sake; Because Your lovingkindness is good, deliver me;
22 For I am afflicted and needy, And my heart is wounded within me.
23 I am passing like a shadow when it lengthens; I am shaken off like the locust.
24 My knees are weak from fasting, And my flesh has grown lean, without fatness.
25 I also have become a reproach to them; When they see me, they wag their head.

21 Commit the cause to God

Notice that the first thing he does is to commit the cause to God. “Thou, O God of my life, deal on my behalf for thy name’s sake!” Here is a man who understands the nature of reality. He understands how life operates. He understands the truth
behind the admonition of Scripture, both in the Old and New Testament, “Vengeance is mine, says the Lord; I will repay,” (Deuteronomy 32:35, Romans 12:19). Vengeance is mine! Don’t you try it, don’t you attempt it. Don’t try to “get even” because if you do you’ll only make the matter worse. You will perpetuate a feud that may go on for years, even for centuries, destroying, wrecking, damaging others and creating all kinds of difficulties both for them and for you.
No, no, vengeance is mine, says the Lord. I am the only one who has the wisdom adequate to handle this kind of a problem. This man recognizes that and commits the cause to God.

But he also understands something else. He understands that God’s name is involved in all this. When God’s people are being persecuted then God is also being persecuted. His name is involved in it. It is up to God to defend that name, not man. Recall that when Saul of Tarsus was converted on the Damascus road and the Lord Jesus appeared to him in light brighter than the sun, that Saul cried out to him and said, “Lord, who are you?” Jesus said, “I am Jesus whom you are persecuting.” Saul was persecuting the Christians, but when he was persecuting them he was also persecuting the Lord. God is involved in his people’s trials. God is involved in what happens to his own. The Psalmist, understanding this, commits the whole cause to God and says, “God, you deal with it. It is your problem. Your name is involved; you handle it on my behalf for your name’s sake.” Is that not a thoroughly Christian reaction? Listen to Peter as he shows us that this was exactly the reaction of the Lord Jesus, himself.

He committed no sin; no guile was found on his lips. When he was reviled, he did not revile in return; when he suffered, he did not threaten; but he trusted to him who judges justly. (1 Peter 2:22-23 RSV)

26 Help me, O LORD my God; Save me according to Your lovingkindness.
27 And let them know that this is Your hand; You, LORD, have done it.
28 Let them curse, but You bless; When they arise, they shall be ashamed, But Your servant shall be glad.
29 Let my accusers be clothed with dishonor, And let them cover themselves with their own shame as with a robe.
30 With my mouth I will give thanks abundantly to the LORD; And in the midst of many I will praise Him.
31 For He stands at the right hand of the needy, To save him from those who judge his soul.

My assailants shall be put to shame, and thy servant shall be glad!

My accusers shall be clothed with dishonor; they shall be wrapped in their own shame as in a mantle! (Psalms 109:28b-29 Indicative Mood)