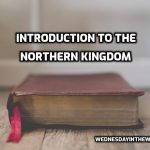 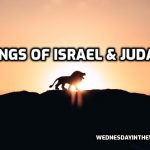 This chart summarizes the Kings of Israel and Judah from the crowning of Saul to the captivity of Judah.