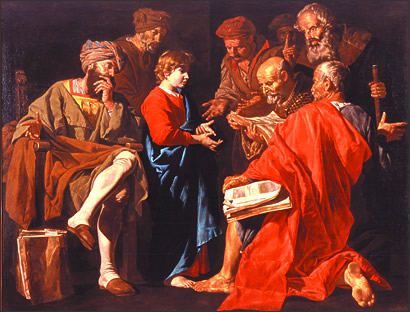 Scripture is almost silent on how Jesus spent his growing years. One of rare glimpses into the “lost years” of Jesus between his birth and the beginning of his public ministry is found in Luke 2:

Now His parents went to Jerusalem every year at the Feast of the Passover.  And when He became twelve, they went up there according to the custom of the Feast; and as they were returning, after spending the full number of days, the boy Jesus stayed behind in Jerusalem. But His parents were unaware of it,  but supposed Him to be in the caravan, and went a day’s journey; and they began looking for Him among their relatives and acquaintances. When they did not find Him, they returned to Jerusalem looking for Him.  Then, after three days they found Him in the temple, sitting in the midst of the teachers, both listening to them and asking them questions.  And all who heard Him were amazed at His understanding and His answers.  When they saw Him, they were astonished; and His mother said to Him, “Son, why have You treated us this way? Behold, Your father and I have been anxiously looking for You.”  And He said to them, “Why is it that you were looking for Me? Did you not know that I had to be in My Father’s house?” But they did not understand the statement which He had made to them. And He went down with them and came to Nazareth, and He continued in subjection to them; and His mother treasured all these things in her heart.  And Jesus kept increasing in wisdom and stature, and in favor with God and men.  – Luke 2:41-52

Jesus as a 12-year old boy confounds the religious experts by the questions he asked and the answers he gave them.  How could a 12-year old astonish the best theologians of his day? Why was the knowledge of Jesus radically different than everyone else?

The fall not only made our physical bodies frail and prone to disease, sin also confused and darkened our minds.  Theologians calls this problem the “noetic effect of sin” (from the Greek word for ‘mind’).  Sin impairs our ability to think clearly.

Of course, we still have the capacity for reason and rational understanding.  We can still pursue philosophy, science and wisdom with some success, but in our fallen state we make mistakes in our thinking both small and serious.   The old adage “To err is human” is a constant reminder of our fallen state.

But Jesus’s mind was not clouded by the noetic effect of sin.  His thinking was clear.  His logic impeccable.  His mind, thoughts, presuppositions and understanding were perfectly attuned to God.  Jesus at 12 wasn’t showing off.  He simply was not hampered by the effects of sin, and the result astounded the religious experts of his day.

The noetic effect of sin helps explains why two sincere bible-believing Christians can study the same passage of scripture using the same methodology and reach different conclusions.  We are errant.

While we have the same basic material to work with, and some may study more diligently or have more background and education, all of us remain affected by sin.  All of us make logical errors, jump to unwarranted conclusions and cling to wrong presuppositions.

To improve our Bible study, we must approach the text with humility, starting from the premise that my human understanding is flawed and willing to lay aside any presuppositions challenged by the text.

As Bob Smith wrote in Basics of Bible Interpretation:

Much Bible study is done to verify men’s preconceptions, since all of us bring our personal opinions and biases with us. But honesty demands that we start with a clean page on which God may write his thoughts. If we can use our sanctified imagination to put ourselves in the writer’s place and see things through his eyes, we will open up the windows of our minds to let in the light of God’s truth. If God has really spoken through the pen of the human author, let’s not try to rewrite the script. Proof-texting, i.e., quoting only those biblical texts which are useful to prove our own preconceived opinions and theological biases, is a favorite trick of the cultists and only succeeds in confusing the issue. We don’t want to play that game. On the other hand, it is truly remarkable what we can discover when we let God say what he has said. (- from Basics of Bible Interpretation by Bob Smith, chapter 4)

Photo Christ Among the Doctors by Matthias Stomer, Netherlands, 1600-1650 AD