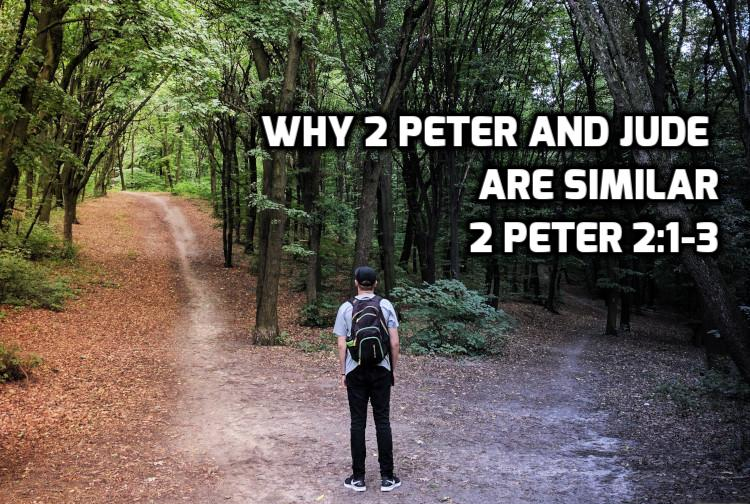 2Peter 2 begins a new topic: the coming judgment.  While the main point of the chapter is fairly clear, the way Peter makes his point presents some interpretative challenges:

Why are 2Peter 2 and Jude so similar?

Comparison of 2 Peter and Jude

There are 3 possibilities that explain why  Peter 2 and Jude parallel each other:

While scholars advocate for each point of view, my conclusion is the Peter wrote first and Jude copied from Peter, because in one place Peter and Jude use similar words, but they say something different.

Peter 3:1 This is now the second letter that I am writing to you, beloved. In both of them I am stirring up your sincere mind by way of reminder, 2that you should remember the predictions of the holy prophets and the commandment of the Lord and Savior through your apostles, 3knowing this first of all, that scoffers will come in the last days with scoffing, following their own sinful desires. 4They will say, “Where is the promise of his coming? For ever since the fathers fell asleep, all things are continuing as they were from the beginning of creation.” –  Peter 3:1-4 ESV

Peter tells his readers to remember what the apostles and prophets told them because mockers are coming who will claim otherwise.  When that happens, Peter encourages them to remember his words as one of the apostles and not be persuaded to abandon those promises even if it seems like their fulfillment is a long time coming.

Jude says the same thing with a significant difference.

Jude 1:17  But you must remember, beloved, the predictions of the apostles of our Lord Jesus Christ. 18They said to you, “In the last time there will be scoffers, following their own ungodly passions.” Jude 1:17-18 ESV

Jude says: The apostles said that scoffers will come and I want you to remember their words.  Since we know that is something Peter said in this letter, Jude’s language suggests he is liberally quoting Peter and adapts his language in this spot to reveal his circumstances.

2:1 But false prophets also arose among the people, just as there will be false teachers among you, who will secretly bring in destructive heresies, even denying the Master who bought them, bringing upon themselves swift destruction. 2And many will follow their sensuality, and because of them the way of truth will be blasphemed.  3And in their greed they will exploit you with false words. Their condemnation from long ago is not idle, and their destruction is not asleep. – 2 Peter 2:1-3 ESV

Series: 2Peter: How to find Life

Photo by Vladislav Babienko on Unsplash
(This article has been read 2,858 times plus 8 today.)