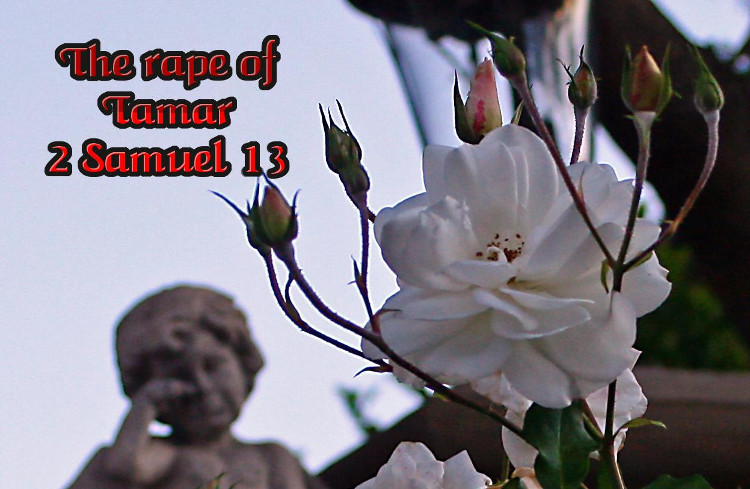 Amnon is the eldest son of David by Ahinoam, the Jezreelitess (2 Samuel 3:2).  Amnon is lovesick for his half-sister Tamar, and there the story should have ended.  Yet with the help of his cousin Jonadab, Amnon feigns illness and persuades his father to send Tamar to nurse him back to health.  He traps her alone in his bedroom, and he forces himself upon her.  Magnifying the sin, after violating her, Amnon throws her away.  But Tamar doesn’t go quietly.  Her brother Absalom is rightly enraged and thus begins the plot which will lead to civil war.

In every way the text presents Tamar as a woman wronged while each of the male characters in the story fail to protect and respect her.

Ammon demonstrates passion without love.  Amnon is not attracted by Tamar’s character, wisdom, purity or work ethic.  He wants her simply because she is beautiful.

But Amnon had a friend, whose name was Jonadab, the son of Shimeah, David’s brother. And Jonadab was a very crafty man. – 2 Samuel 13:3

Jonadab demonstrates wisdom without principle. He could have reasoned with Amnon and persuaded him to seek an honorable marriage. Instead Jonadab uses his wisdom to plot a crime.

David demonstrates anger without justice. Amnon should have been punished and Tamar exonerated. As both king and father, David is the only one in a position deliver justice.  If David fails to act, no one else can.

But Absalom spoke to Amnon neither good nor bad, for Absalom hated Amnon, because he had violated his sister Tamar. – 2 Samuel 13:22

Absalom demonstrates hatred without restraint. Absalom waits two years for his father to act (13:230) during which time he plotted revenge.  Then Absalom takes matters into his own hands.

After executing his revenge, Absalom flees to his mother’s family, the King of Geshur and lives in exile for three years.  Leaving David in grief and the future of the Davidic kingship in question.

Where is God while all this is happening to Tamar?

Sin always has consequences and those consequences can be far reaching.  Ultimately the consequences of our sin are meant to drive us back to the feet of our heavenly father.  We will see David’s grief drive him back to God and we hope that Tamar’s sorrow also drove her to the arms of her heavenly father who is the only one who could heal the deepest grief and right the most tragic wrong.

Though Tamar did nothing to bring this tragedy upon herself and we should grieve over the injustice done to her, she was still a sinner in need of salvation. By proclaiming that Tamar was treated unjustly, we are not accusing God of injustice or neglect.  None of us deserve the blessings he gives us either in this world or the next.

RC Sproul explains it this way in “The Holiness of God”

“We are not really surprised that God has redeemed us. Somewhere deep inside, in the secret chambers of our heart, we harbor the notion that God owes us His mercy.  Heaven would not be quite the same if we were excluded from it.  We know that we are sinners, but we are surely not as bad as we could be.  There are enough redeeming features to our personalities that if God is really just, He will include us in salvation.  What amazes us is justice, not grace.” (pg 123-124)

Sproul then goes on to summarize (pg 127)

“Though people may mistreat me, God never does. That God allows a human being to treat me unjustly is just of God. While I may complain to God about the human, horizontal injustice I have suffered, I cannot rise up and accuse God of committing a vertical injustice by allowing the human injustice to befall me.  God would be perfectly just to allow me to be thrown in prison for life for a crime I didn’t commit.  I may be innocent before other people, but I am guilty before God…. It is impossible for anyone, anywhere, anytime to deserve grace.  Grace by definition is undeserved.” (pg 127)