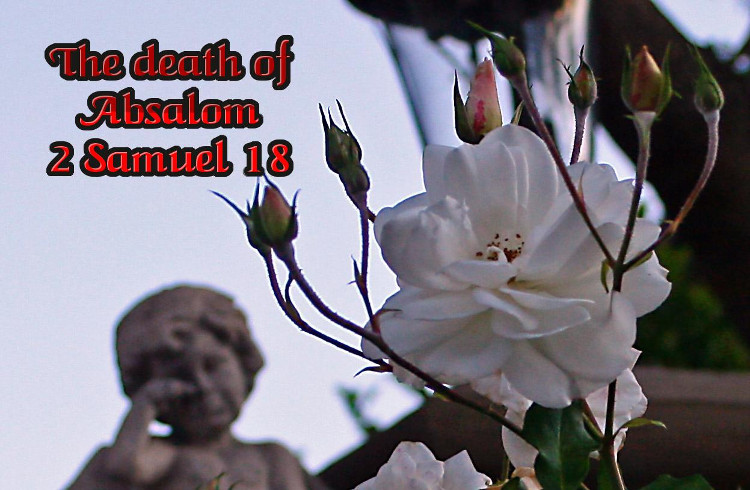 2 Samuel 18 is the climax of the story of the rebellion of Absalom.  The story begins with the rape of Absalom’s sister Tamar by his half-brother Amnon (2 Samuel 13).  Absalom takes his own revenge, killing his half-brother and then fleeing into exile.  After 3 years in exile, he is allowed to return to Jerusalem and reunites with this father King David (2 Samuel 14).  But Absalom’s rebellion continues as he declares himself king (2 Samuel 15), forcing David to flee Jerusalem (2 Samuel 16) while the Lord keeps David safe through a variety of faithful servants (2 Samuel 17).

In 2 Samuel 18 we see how the story ends.  In a Hollywood movie, this chapter would be the climax. The camera would show each twist and turn of the battle.  At first the rebel forces would gain the upper hand, forcing back our heroes.  But just when all appears lost, our hero would summon some last shred of inner strength and the tide would slowly turn in his favor.  His courage would inspire his friends to try just a little harder, and then step by step, the villains would be beaten back.

But in our text the battle is allotted only three short verses.  Instead, the narrator focuses our attention on: 1) how Absalom dies and 2) how David both fears for and reacts to the news of Absalom’s death, especially when David learns that the price of rebellion is the death of his son.

Preparation for the battle

1Then David mustered the men who were with him and set over them commanders of thousands and commanders of hundreds. 2And David sent out the army, one third under the command of Joab, one third under the command of Abishai the son of Zeruiah, Joab’s brother, and one third under the command of Ittai the Gittite. And the king said to the men, “I myself will also go out with you.”  3But the men said, “You shall not go out. For if we flee, they will not care about us. If half of us die, they will not care about us. But you are worth ten thousand of us. Therefore it is better that you send us help from the city.”  4The king said to them, “Whatever seems best to you I will do.” So the king stood at the side of the gate, while all the army marched out by hundreds and by thousands.  5And the king ordered Joab and Abishai and Ittai, “Deal gently for my sake with the young man Absalom.” And all the people heard when the king gave orders to all the commanders about Absalom. – 2 Samuel 18:1-5

6So the army went out into the field against Israel, and the battle was fought in the forest of Ephraim.  7And the men of Israel were defeated there by the servants of David, and the loss there was great on that day, twenty thousand men. 8The battle spread over the face of all the country, and the forest devoured more people that day than the sword. -2 Samuel 18:6-8

The Death of Absalom

9And Absalom happened to meet the servants of David. Absalom was riding on his mule, and the mule went under the thick branches of a great oak, and his head caught fast in the oak, and he was suspended between heaven and earth, while the mule that was under him went on. 10And a certain man saw it and told Joab, “Behold, I saw Absalom hanging in an oak.” 11Joab said to the man who told him, “What, you saw him! Why then did you not strike him there to the ground? I would have been glad to give you ten pieces of silver and a belt.” 12But the man said to Joab, “Even if I felt in my hand the weight of a thousand pieces of silver, I would not reach out my hand against the king’s son, for in our hearing the king commanded you and Abishai and Ittai, ‘For my sake protect the young man Absalom.’ 13On the other hand, if I had dealt treacherously against his life (and there is nothing hidden from the king), then you yourself would have stood aloof.” 14Joab said, “I will not waste time like this with you.” And he took three javelins in his hand and thrust them into the heart of Absalom while he was still alive in the oak.  15And ten young men, Joab’s armor-bearers, surrounded Absalom and struck him and killed him. 16Then Joab blew the trumpet, and the troops came back from pursuing Israel, for Joab restrained them.  17And they took Absalom and threw him into a great pit in the forest and raised over him a very great heap of stones. And all Israel fled every one to his own home.  18Now Absalom in his lifetime had taken and set up for himself the pillar that is in the King’s Valley, for he said, “I have no son to keep my name in remembrance.” He called the pillar after his own name, and it is called Absalom’s monument to this day. -2 Samuel 18:9-18

19Then Ahimaaz the son of Zadok said, “Let me run and carry news to the king that the LORD has delivered him from the hand of his enemies.” 20And Joab said to him, “You are not to carry news today. You may carry news another day, but today you shall carry no news, because the king’s son is dead.”  21Then Joab said to the Cushite, “Go, tell the king what you have seen.” The Cushite bowed before Joab, and ran. 22Then Ahimaaz the son of Zadok said again to Joab, “Come what may, let me also run after the Cushite.” And Joab said, “Why will you run, my son, seeing that you will have no reward for the news?” 23″Come what may,” he said, “I will run.” So he said to him, “Run.” Then Ahimaaz ran by the way of the plain, and outran the Cushite.  24Now David was sitting between the two gates, and the watchman went up to the roof of the gate by the wall, and when he lifted up his eyes and looked, he saw a man running alone. 25The watchman called out and told the king. And the king said, “If he is alone, there is news in his mouth.” And he drew nearer and nearer.  26The watchman saw another man running. And the watchman called to the gate and said, “See, another man running alone!” The king said, “He also brings news.”  27The watchman said, “I think the running of the first is like the running of Ahimaaz the son of Zadok.” And the king said, “He is a good man and comes with good news.”  28Then Ahimaaz cried out to the king, “All is well.” And he bowed before the king with his face to the earth and said, “Blessed be the LORD your God, who has delivered up the men who raised their hand against my lord the king.”  29And the king said, “Is it well with the young man Absalom?” Ahimaaz answered, “When Joab sent the king’s servant, your servant, I saw a great commotion, but I do not know what it was.”  30And the king said, “Turn aside and stand here.” So he turned aside and stood still.  31And behold, the Cushite came, and the Cushite said, “Good news for my lord the king! For the LORD has delivered you this day from the hand of all who rose up against you.”  32The king said to the Cushite, “Is it well with the young man Absalom?” And the Cushite answered, “May the enemies of my lord the king and all who rise up against you for evil be like that young man.”  33 And the king was deeply moved and went up to the chamber over the gate and wept. And as he went, he said, “O my son Absalom, my son, my son Absalom! Would I had died instead of you, O Absalom, my son, my son!”  19:1It was told Joab, “Behold, the king is weeping and mourning for Absalom.”   2So the victory that day was turned into mourning for all the people, for the people heard that day, “The king is grieving for his son.”  3And the people stole into the city that day as people steal in who are ashamed when they flee in battle.   4The king covered his face, and the king cried with a loud voice, “O my son Absalom, O Absalom, my son, my son!”  5Then Joab came into the house to the king and said, “You have today covered with shame the faces of all your servants, who have this day saved your life and the lives of your sons and your daughters and the lives of your wives and your concubines,  6because you love those who hate you and hate those who love you. For you have made it clear today that commanders and servants are nothing to you, for today I know that if Absalom were alive and all of us were dead today, then you would be pleased.  7Now therefore arise, go out and speak kindly to your servants, for I swear by the LORD, if you do not go, not a man will stay with you this night, and this will be worse for you than all the evil that has come upon you from your youth until now.”  8Then the king arose and took his seat in the gate. And the people were all told, “Behold, the king is sitting in the gate.” And all the people came before the king. Now Israel had fled every man to his own home.  – 2 Samuel 18:19-19:8

He himself bore our sins in his body on the tree, that we might die to sin and live to righteousness. By his wounds you have been healed.– 1 Peter 2:24