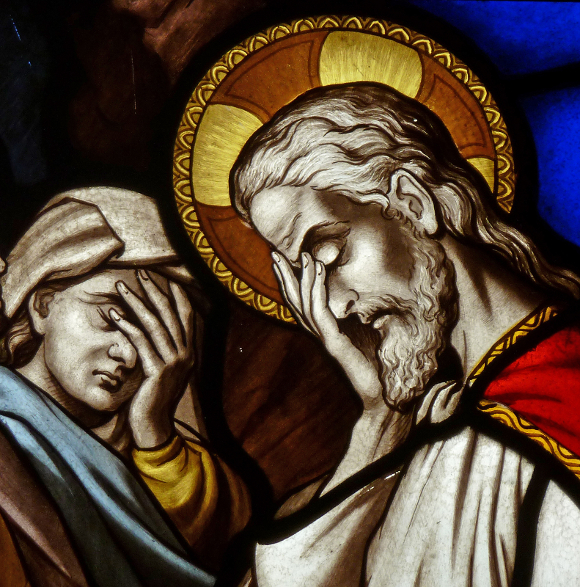 In the world-according-to-me, most people ought to fall into one of two easily recognizable categories:

The problem with this scenario, of course, is its lack of correspondence to reality. But because some vague sketch of it remains in my subconsciousness, certain events still surprise me.

For example, a woman I’ll call Jill (don’t worry; you’re not her, and you don’t know her) is a Christian, but some of her theology seems wrong to me, and she has one particular obsession that makes it impossible for her to relate well to a certain group of people. And yet there she is, caring for sick people, babysitting their children, and taking in another woman who needs a temporary home. Is God using Jill to spread His love? It certainly seems so. Does this mean that Jill’s theology has improved (you know, to match mine) or that her obsession is lessening? Not a bit. God seems to be using her just as she is.

Another kind of problem frequently arises. I see some godly man, perhaps a pastor or other Christian leader with good theology, whose teaching I’ve really respected, and suddenly—BAM!—he’s acted in a very ungodly way, whether sexually or financially or through selfishness or a bad temper. And I wonder, “Does that invalidate all he’s taught because he’s not living according to the truth? Is any apparent godliness in his life a sham?” Or, “If the founder of a ministry neglected his family while he was pouring his heart and time into the ministry, does that invalidate the ministry?”

And then what about non-Christians who do good things that genuinely help people: feed the poor, encourage and comfort the sad, and so forth? Could God possibly be using them? What about when non-Christians financially support Christian ministries? Is God using them?

Because the Bible shows real people in the real world, it shows the same kinds of messiness that we see in the world around us, and it helps me wade through some of my confusion.

Can God use less-than-perfect believers without also perfecting them at the same time?

Read about Jonah and Samson. “Less-than-perfect” doesn’t begin to describe either of them. Jonah refused to do what God directly ordered him to do and tried to hide from God. (How’s that for screwy theology?) When he was finally forced to preach in Ninevah, Jonah did it sullenly and with a desire that no one would listen and that God would destroy the whole city. But, amazingly and confusingly, God used his reluctant messenger to bring the Ninevites to repentance.

Jonah, however, is a sweetheart compared with Samson. Samson never showed any concern at all for God or God’s people. He was really a spoiled brat and a bully whose main desire was for beautiful gentile women, a man who threw a violent tantrum whenever his desires were thwarted, a man who used his God-given strength for his personal benefit while shunning God’s commands. Even at the end of his life when he asked God for strength to kill the Philistines (only his second recorded prayer or mention of God), his motivation was personal revenge: “O Lord God, please remember me and please strengthen me just this time, O God, that I may at once be avenged of the Philistines for my two eyes” (Judges 16:28). And yet God used Samson to free his people from that round of Philistine domination.

How can God use such men? Why doesn’t He find godlier ambassadors? One answer might be that sinners are the only kind of person God has to work with. But still, God could have made Jonah and Samson a little godlier, at least, before He used them.

So, let’s look at some of the Bible’s godlier heroes, men like Abraham and David. They both feared God and worshiped Him. Abraham is called the “friend of God,” and David is known as a “man after God’s own heart.” Both Old and New Testaments present them as examples of faith. But both had huge periods of ungodliness. Abraham didn’t trust that God would keep him alive if he admitted to being Sarah’s husband (even though God had promised him descendents, so God would have needed to keep him alive), so he handed his wife over to other men. Even the pagans rebuked him for such behavior. David’s Bathsheba-and-Uriah failure is his best-known, but he also had a few other spells of seeking personal revenge or glory, not to mention having multiple wives in direct disobedience to God’s command for Israelite kings in Deuteronomy 17:17.

Do their failures negate the good examples of Abraham and David? Apparently not.

Abraham is still cited in the New Testament as the faithful father of believing Jews and gentiles. The Bible clearly presents David’s sins and just as clearly presents his psalms for our instruction and encouragement. He is still the founder of the permanent royal line that culminated in Jesus.

What conclusions can we draw from all this, despite the obvious “God sure doesn’t do things the way I would”? In attempting an answer, three characteristics of God strike me: His power and His grace, both of which proclaim His glory.

God’s power is not just brute power-to-make-things-happen, but the power to use even sinful motives and actions to bring spiritual salvation, as in Ninevah, and physical redemption, as with Samson. What wonderful news! I don’t have to be perfect in order for God to use me, and neither do you or those other exasperating people. God can not only use you and me in spite of the fact that we’re generally sinful; He can use us when our motivation or attitude or actions are sinful at the moment! This should not lead us to be cavalier about our sinfulness. But imagine what it would be like to believe that God could only use a person who had perfect theology, a continual trust in God, total unselfishness, and love unmixed with any taint of pride, greed, or grouchiness. Either we would consider ourselves to be totally useless for God’s kingdom, or, if we saw a time when God did use us in someone’s life, we would think we must be pretty wonderful. Instead, no matter how aware we are of our own sinfulness, selfishness, mixed motivations, and theological confusion, God can still use us. As I often remind myself, if God can use a donkey (Numbers 22), then God can even use me—or you—or that other off-center guy.

For example, how many people initially came to Christ through ministries they now consider to be theologically weak? But God still worked through those ministries. I know people who were led to Christ by others who later abandoned Christianity. But God still used those people to spread His gospel. There are some people I think aggravating or spiritually or theologically inferior (I’m showing you my sinfulness) whom I’ve seen God use to spread love and hope and comfort and truth. What shall we say to all this? “To God be the glory.” The very phenomenon of God’s using such cracked vessels demonstrates His glory—His amazing ability to work with inferior products to generate life-changing results in others (sort of like MacGyver saving the day with only duct tape and three matches).

But in addition to God’s power to use sinners, we see His grace in forgiving them (us) and not letting their sins erase their moments of faithfulness. Again, consider Abraham; David; Peter, who denied all knowledge of Jesus but later became the spokesman for the apostles; Bathsheba, who also sinned but became the ancestor of Jesus; or Moses, who originally responded to God’s call with “send someone else” and many years later disobeyed and dishonored God enough to be denied entrance into Canaan—but not enough to lose his “friend of God” standing.

For us, whose lives are a mixture of truth and falsehood, love and selfishness, faith and unbelief, generosity and greed, that is good news indeed. Our moments (days, years) of weakness, sinfulness, or incorrectness don’t disqualify us from God’s continued commitment and grace if we are truly His.

The reality of God’s using and forgiving sinful human beings also reminds me to be less demanding in my expectations of other Christians. Do they slip? Yes. Do they have wrong perspectives and habits? Of course. Will they sometimes need to be reproved and corrected? Indeed. Will their sins be unforgivable or disqualify them from any future ministry or make them unusable to God? No. Those same blessings that are so dear to me must also be extended to others. Though I may disagree with my fellow-believer’s theology or view some of his actions as foolish, weak, or downright evil, that is no reason for me to despise him or to avoid him. Remembering both my own waywardness and God’s treatment of His other wayward creatures should encourage me to be gracious, forbearing, and forgiving, as He is.

Let us not become boastful, challenging one another, envying one another. Brethren, even if anyone is caught in any trespass, you who are spiritual, restore such a one in a spirit of gentleness; each one looking to yourself, so that you too will not be tempted. — Galatians 5:26- 6:1

To be judgmental is so easy; I need to remember that even if I try to be subtle about it (for example, I wouldn’t have fled from Ninevah; I just would have had too many other urgent things to do), I am far from perfect myself. I need God’s wisdom and insight to be able to appreciate God’s work in and through others’ lives at the same time that I see those people’s weaknesses.

So, neither life nor God fit my expectations. Life is much more confusing than I think it should be. God is so much more gracious than I think He would be, forgiving not just our “moments of sin” but also our sinful bents and tendencies (our self-righteousness, our laziness, our adoption of our culture’s values, our selfishness, our lack of submission to God, our rationalizations of our anger and pettiness) after we claim His name as well as before. And God’s power, wisdom, and ability to use such confused, aggravating, and stubborn creatures to do His work on earth are truly mind-boggling.

Oh, the depth of the riches both of the wisdom and knowledge of God! How unsearchable are His judgments and unfathomable His ways! For WHO HAS KNOWN THE MIND OF THE LORD, OR WHO BECAME HIS COUNSELOR? Or WHO HAS FIRST GIVEN TO HIM THAT IT MIGHT BE PAID BACK TO HIM AGAIN? For from Him and through Him and to Him are all things. To Him be the glory forever. Amen. –Romans 11:33-36

Kay Smith is part of the MSC/Gutenberg College community.  She received a degree in economics from Stanford University, after which she completed a two-year biblical studies program (Scribe School) at Peninsula Bible Church in Palo Alto, California. Currently, she tutors students in math and English.  This article was first published on the Gutenberg College website and is used with permission.