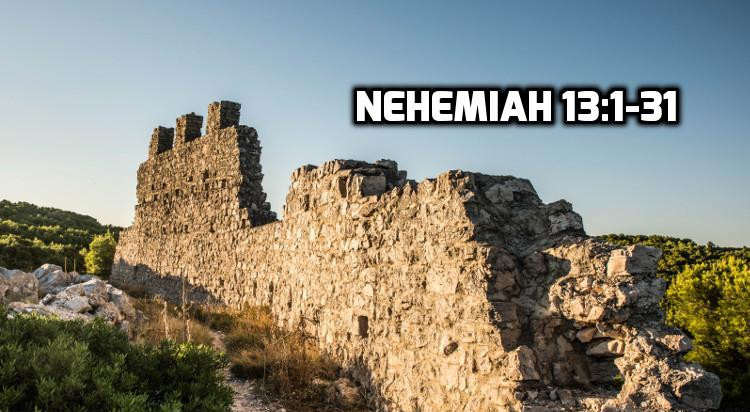 The book opens in the 20th year of King Artaxeres (approx. 445-446 BC).  Nehemiah stayed in Jerusalem until the 32nd year of the king (or 12 years) as governor of the region.  At that point he returned to Persia.  Some years later he asked permission to return to Jerusalem and that is when we find the events of chapter 13.

When Nehemiah returns, probably as an old man, he finds the people have broken every one of the vows they made.

Neh 13:4 Now before this, Eliashib the priest, who was appointed over the chambers of the house of our God, and who was related to Tobiah,
Neh 13:5 prepared for Tobiah a large chamber where they had previously put the grain offering, the frankincense, the vessels, and the tithes of grain, wine, and oil, which were given by commandment to the Levites, singers, and gatekeepers, and the contributions for the priests.

Neh 13:15 In those days I saw in Judah people treading winepresses on the Sabbath, and bringing in heaps of grain and loading them on donkeys, and also wine, grapes, figs, and all kinds of loads, which they brought into Jerusalem on the Sabbath day. And I warned them on the day when they sold food.
Neh 13:16 Tyrians also, who lived in the city, brought in fish and all kinds of goods and sold them on the Sabbath to the people of Judah, in Jerusalem itself!
Neh 13:17 Then I confronted the nobles of Judah and said to them, “What is this evil thing that you are doing, profaning the Sabbath day?

The third problem Nehemiah found is in Nehemiah 13:23-25.

Neh 13:23 In those days also I saw the Jews who had married women of Ashdod, Ammon, and Moab.
Neh 13:24 And half of their children spoke the language of Ashdod, and they could not speak the language of Judah, but only the language of each people.
Neh 13:25 And I confronted them and cursed them and beat some of them and pulled out their hair. And I made them take oath in the name of God, saying, “You shall not give your daughters to their sons, or take their daughters for your sons or for yourselves.

Why was Nehemiah so ruthless? Jesus makes the same point in Matthew 18:7-9.

Nehemiah reacts with the same exaggerated force to make the point: the compromise must stop.