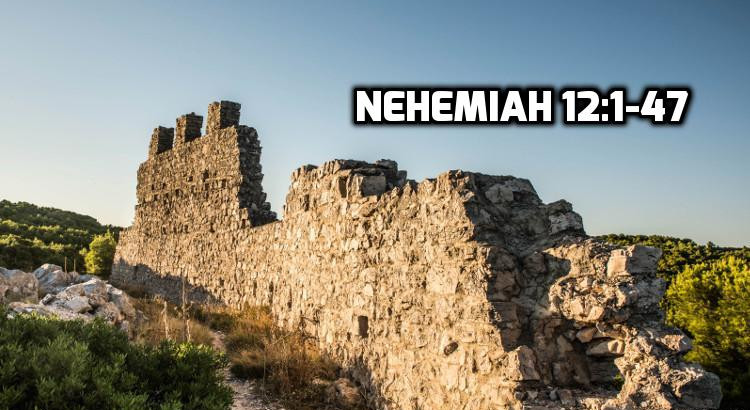 How should the story end?  “And they all lived happily ever after.”

The history told in Nehemiah is a historic witness to the restoring work of God in people’s lives.  Now in chapter 12, at the what should be the end of the story, Nehemiah is once again going to make a circuit of the city. But this time instead of a single rider on a single horse as we saw in chapter 2, he is part of a parade circling the city on top of the rebuilt walls, singing the praises of God.

2:11So I went to Jerusalem and was there three days.  12Then I arose in the night, I and a few men with me. And I told no one what my God had put into my heart to do for Jerusalem. There was no animal with me but the one on which I rode. 13I went out by night by the Valley Gate to the Dragon Spring and to the Dung Gate, and I inspected the walls of Jerusalem that were broken down and its gates that had been destroyed by fire.  14Then I went on to the Fountain Gate and to the King’s Pool, but there was no room for the animal that was under me to pass.  15Then I went up in the night by the valley and inspected the wall, and I turned back and entered by the Valley Gate, and so returned. – Nehemiah 2:11-15