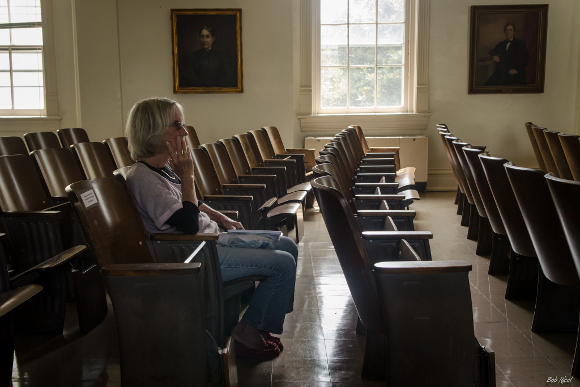 In the introduction to our study of 1 John, I referenced a July 2013 post on the Christianity Today Her.meneutics blog concerning how “youth focused Christianity may be sidelining the gifts of older women.”

Below is the section from which I quoted:

But one theme emerged that I hadn’t expected: women in the middle of their lives who felt invisible and ignored by the church, the same way they feel invisible or ignored in our culture.

These are women of my mother’s generation, maybe 10 or even 20 years on either side. I heard their hurt, sorrow, and stoicism about life within the church. In a sea of artful hipsters and energetic young people with self-promotion apparently engrained into their DNA, they feel invisible and overlooked.

One woman told me about how she had led worship at her church for years. But when a new young pastor was hired, he wanted a cooler band to get more young people in the door. First thing to go? Older women. “No one wanted to see middle-aged women on stage,” she wrote candidly, and so she was replaced with young women in their late teens and early twenties.

Another woman told me she had very high levels of education, a seminary degree, a long history of teaching with many beloved students, but every teacher at her church’s education program was a young, charismatic man with half her education, let alone experience. The church’s “official” position welcomed women in ministry but in practice, it wasn’t actually happening. She believed it was because she did not fit the expected look or personality or gender of their education program.

Another woman shared about how she has welcomed the shift in the churches of her context towards women in leadership and ministry even though they are all young and beautiful with identical outgoing and big-smiling personalities. The glass ceiling remains for her because she doesn’t fit the preferred look or personality but she cheers on these young women anyway. Her view is that at least women are in public ministry now, in a way that the young women of her generation couldn’t be.

You can read the entire post “The Invisible Generation” by Sarah Bessey here.

Photo Cogitation in the Chapel taken by Small-Realm and used here under Flickr Creative Commons.