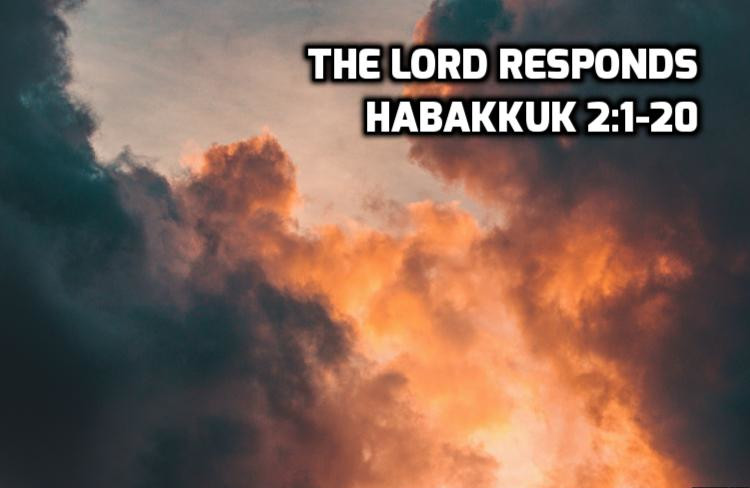 Instead of the typical scroll, the Lord instructs Habakkuk to record this vision in a more permanent form: a stone tablet.

Hab 2:1 I will take my stand at my watch post and station myself on the tower, and look out to see what he will say to me, and what I will answer concerning my complaint.
Hab 2:2 And the LORD answered me: “Write the vision; make it plain on tablets, so he may run who reads it.
Hab 2:3 For still the vision awaits its appointed time; it hastens to the end–it will not lie. If it seems slow, wait for it; it will surely come; it will not delay.
Hab 2:4 “Behold, his soul is puffed up; it is not upright within him, but the righteous shall live by his faith.

In 2:4, one of the most frequently quoted verses in the New Testament, he contrasts two kinds of people: one group believes they are self sufficient and needs no God;  the other group lives by a deep abiding trust in God.

Woe to the Unfaithful

The rest of chapter 2 is a series of woes to the Chaldeans.

Hab 2:5 “Moreover, wine is a traitor, an arrogant man who is never at rest. His greed is as wide as Sheol; like death he has never enough. He gathers for himself all nations and collects as his own all peoples.”
Hab 2:6 Shall not all these take up their taunt against him, with scoffing and riddles for him, and say, “Woe to him who heaps up what is not his own– for how long?– and loads himself with pledges!”
Hab 2:7 Will not your debtors suddenly arise, and those awake who will make you tremble? Then you will be spoil for them.
Hab 2:8 Because you have plundered many nations, all the remnant of the peoples shall plunder you, for the blood of man and violence to the earth, to cities and all who dwell in them.

Hab 2:9 “Woe to him who gets evil gain for his house, to set his nest on high, to be safe from the reach of harm!
Hab 2:10 You have devised shame for your house by cutting off many peoples; you have forfeited your life.
Hab 2:11  For the stone will cry out from the wall, and the beam from the woodwork respond.

Hab 2:12  “Woe to him who builds a town with blood and founds a city on iniquity!
Hab 2:13  Behold, is it not from the LORD of hosts that peoples labor merely for fire, and nations weary themselves for nothing?
Hab 2:14  For the earth will be filled with the knowledge of the glory of the LORD as the waters cover the sea.

Hab 2:15  “Woe to him who makes his neighbors drink– you pour out your wrath and make them drunk, in order to gaze at their nakedness!
Hab 2:16  You will have your fill of shame instead of glory. Drink, yourself, and show your uncircumcision! The cup in the LORD’s right hand will come around to you, and utter shame will come upon your glory!
Hab 2:17  The violence done to Lebanon will overwhelm you, as will the destruction of the beasts that terrified them, for the blood of man and violence to the earth, to cities and all who dwell in them.

Hab 2:18  “What profit is an idol when its maker has shaped it, a metal image, a teacher of lies? For its maker trusts in his own creation when he makes speechless idols!
Hab 2:19  Woe to him who says to a wooden thing, Awake; to a silent stone, Arise! Can this teach? Behold, it is overlaid with gold and silver, and there is no breath at all in it.
Hab 2:20  But the LORD is in his holy temple; let all the earth keep silence before him.”

Habakkuk asks: isn’t the cure worse than the disease? We learn from God’s answer:

Part of the Series: Habakkuk: Faith Under Fire

Photo by Jason Wong on Unsplash