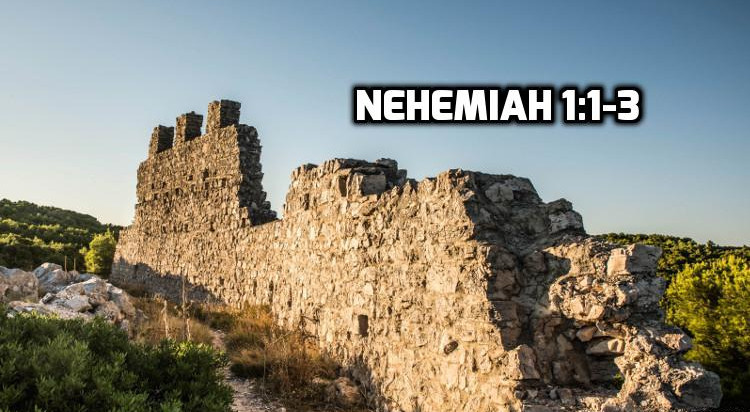 1The words of Nehemiah the son of Hacaliah. Now it happened in the month of Chislev, in the twentieth year, as I was in Susa the capital,  2that Hanani, one of my brothers, came with certain men from Judah. And I asked them concerning the Jews who escaped, who had survived the exile, and concerning Jerusalem.  3And they said to me, “The remnant there in the province who had survived the exile is in great trouble and shame. The wall of Jerusalem is broken down, and its gates are destroyed by fire.” – Nehemiah 1:1-3 ESV

Nehemiah is one of the few Old Testament books with sections written in the first person. It’s interesting how Nehemiah introduces himself.

His name means “God comforts”. He tells us he is the son of Hacaliah, a man not mentioned anywhere else in Scripture. He names his kinsman (Hanani), revealing that he is a member of the Jewish race. When the exiled Jews returned to Judah, he remained behind, living in the citadel of Susa, the winter palace of of the Persian empire.

Almost as an after-thought in the last verse of chapter 1, Nehemiah mentions  he is a man of great political influence: “I was cupbearer to the king.”

During his life in exile, Nehemiah must have gained an good education and progressed up through the ranks of government to become the man who tasted the king’s wine before the king drank it.  His position gave him intimate access to the most powerful king of the day, political standing, and presumably the wealth and stature commensurate to the title.

When we took our son to college, we attended a parents “Q&A” session with a panel of five deans of the university.  To begin the session, each Dean’s introduced himself.  I’ve never heard so many names dropped in my life! Each dean was determined to mention every famous person whose path he had crossed at any point in his career.   After the fifth dean finished, we had been there an hour and no one had asked a question yet.

Contrast that experience with the humble way Nehemiah introduces himself:

How do you introduce yourself? What things about you are the most important to tell someone first?  Do people know about your prayer life before they get your business card? Do they know of your passion for God before they know your job title?

For Nehemiah, being part of the people of God was his identity.  His job was an afterthought.