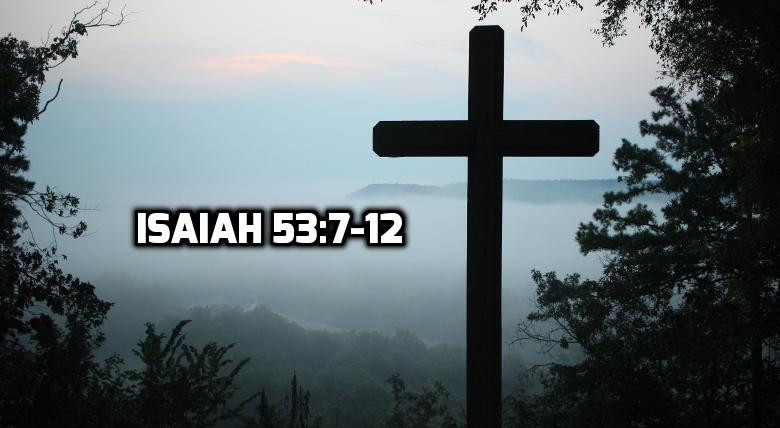 Isaiah describes the work of the Servant and how his work will be received by the Lord, by the nations and by Israel.

In this section he continues the theme of this perfect display of God’s love as we see the Servants trial, death and burial, and finally, his reward.

53:7 He was oppressed and He was afflicted,
Yet He did not open His mouth;
Like a lamb that is led to slaughter,
And like a sheep that is silent before its shearers,
So He did not open His mouth.
8By oppression and judgment He was taken away;
And as for His generation,
who considered That He was cut off out of the land of the living
For the transgression of my people, to whom the stroke was due?
9His grave was assigned with wicked men,
Yet He was with a rich man in His death,
Because He had done no violence,
Nor was there any deceit in His mouth.- Isaiah 53:7-9 NASB

“The servant offered no physical resistance to violence but humbled himself; he offered no verbal resistance but did not open his mouth.  Animals go as uncomprehendingly to slaughter as to shearing;  the Servant who knew well, went to his death with a calmness reflecting not an ignorant but a submitted mind. . . .

sin as willfulness is a thing God cannot overlook.  It is the very heart of our sinfulness that we sin because we want to.  . . .

Because of this, no animal can do more than picture substitution: only a person can substitute for a person; only a consenting will can substitute for a rebellious will.  The Servant, indeed fulfills the stated requirements for a substitute: he identified with sinners in their condemnation (4-5); he  was without stain of sin (9); he was acceptable to the holy God (6,10).  He also adds what no other ever did or could: the will to accept and submit to the substitute’s role (J. Alec Motyer, The Prophecy of Isaiah, pg. 432-433).”

10But the LORD was pleased To crush Him, putting Him to grief;
If He would render Himself as a guilt offering,
He will see His offspring,
He will prolong His days,
And the good pleasure of the LORD will prosper in His hand.
11As a result of the anguish of His soul, He will see it and be satisfied;
By His knowledge the Righteous One, My Servant, will justify the many,
As He will bear their iniquities.
12Therefore, I will allot Him a portion with the great,
And He will divide the booty with the strong;
Because He poured out Himself to death,
And was numbered with the transgressors;
Yet He Himself bore the sin of many,
And interceded for the transgressors. – Isaiah 53:10-12 NASB

Photo by Jacob Meyer on Unsplash
(This article has been read 630 times plus 1 today.)